Sound for Life Ltd. is a company familiar to us -- a few years ago, we reviewed their Forebrain headset device.  We were intrigued by their new Soundsory multi-sensory program. While this program also uses a headset for its user interface, Soundsory is a multi-sensory program for ages three and up (adults included!).  By combining sound with physical activity, the program stimulates the integration of the vestibular and auditory systems and help better integrate body position, balance, and movement information with the brain. This reminded me of an occupational therapy program that Luke had completed several years ago. While that also added visual stimulus/exercises, it was a big help in increasing his proprioceptive awareness. It is something I have been considering repeating for Jude because if you combine his already-present hypotonia and physical delays with typical tween gangliness, you get a kid who has zero concept of where his body is in space.  However, it was a fairly large commitment for our family; the 8-week program required twice-weekly trips to the therapist (over an hour each way).  The 20-hour Soundstory was forty days (so slightly shorter overall) and lacking the visual input, but it could be done at home.  I figured it was worth a try. 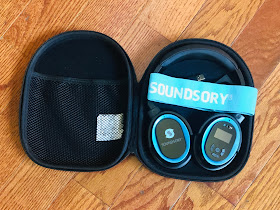 The program is divided into 30-minute sessions (20 hour total), with the individual sessions containing two parts. The first section is a mainly auditory, 25-minute rhythmic music listening session. The sound is delivered in two ways through the dual-interface earphones; they contain both traditional auditory speakers and bone-conduction transmitters. Throughout the session, the user will be exposed to a variety of musical genres. At the start of each half-hour session, the music begins quietly, builds to a crescendo, and then tapers back to quiet, cueing the user to the impending movement session.   At the end of the second section, the headphone will automatically shut off, indicating the end of the day's activity.

Note: the package includes a USB charging cable, and suggests charging through a computer. Though you can use one if you have it, a wall adapter is not included.  We charged ours through the USB plug of an APC surge adapter. A display bar on the side of the headphones shows the remaining battery life, so we knew when to recharge so they did not die mid-session.  Though the headphones also have a Bluetooth function and can be used as "regular" headphones, we did not use this feature.

After the initial novelty wore off, Jude found the listening sessions boring.  There was nothing to do during them -- just sit and listen.  For a kiddo who is fidgety to begin with, asking him to sit and focus for almost half an hour was almost impossible.  Soundsory suggests combining it with quiet free play time.  Jude usually opted for playing with his Power Rangers or Legos. It was enough to keep his hands occupied, but low-stimulation so he could still benefit from the listening.  (You don't want to be reading or watching a screen -- that's too much stimulation, and listening while eating or drinking is discouraged because that will interfere as well.) 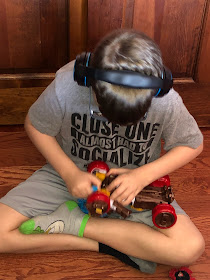 Because the headphone is wireless, it meant he could also take it to his room to work with it. I think this was a big help in getting him to use the program. As he has gotten older, he has become more attuned to when he needs to "stim" (running around in circles is his usual activity), but also more sensitive to others watching him. Despite the fact that the entire house can hear him thumping about, he prefers the illusion that if he is in his room with the door shut, nobody can see him, and therefore his stimming is done "privately." (I've suggested he go outside in the yard, where the is a much larger area to run, and promised to keep his siblings inside until he comes back in, but there are windows and that means the potential to be seen.) After making him do the first few sessions where I could observe him to ensure the headphones remained properly positioned (with the bone conductors on the head, and the right and left sides on the proper side), I let him do the sessions in his room -- I knew when he had begun the movement section by the thumping.  (With autism, you learn to celebrate the hidden victories -- apparently, the newest one is an unanticipated added benefit to hardwood flooring!)

When I asked him what he thought of it, he said it was "Ok."  Thanks, kid...that's incredibly stellar input. I asked him about the music, and he said, "It was strange." Again...thanks, kid. So I put the headphones on myself and listened.  I can see (hear?) where he is coming from. I think it's a big disconcerting, because of the jumpiness and volume changes. Individual rhythms and tempos are relatively short, so the brain doesn't become overly fixated on one piece. While I did not complete the program (I did about a week's worth of listening), I found that some days, this was not an issue for me, and other days, it was incredibly over-stimulating.

The videos were short, and are accessed through the Soundsory website (an access code is provided upon purchase of the headset). The videos can be accessed via laptop, tablet, or mobile device.  Again, this helped with buy-in from Jude because it meant he could control where he did a session. Each day, the user combines seated and standing exercises.  Some are fairly simple -- one called "Sky Earth Stretches" is akin to yoga's forward fold -- while others, like the "Open Close", can be a challenge.  (These photos are from the program; Jude did not wish to have his picture taken during the exercises.) 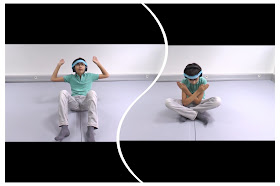 But does it work? At the risk of sounding insipid, the short answer is maybe. Did I see any gains? Nothing impressive that couldn't be coincidental.

Is his focus better because of the program, or was it the psychiatrist adjusted his ADHD medication? Was the little physical awareness increase I saw from the Soundsory or was it from our daily exercise program? He still needed a lot of physical/auditory cueing during our workouts but were the two-out-of-ten-with-proper-form reps from him gaining better awareness in general, or marginally increased muscle memory, or because he put his dumbbells down so he had one less thing to keep track of, or because of just luck?

Soundsory is something that I think we will keep working with -- for half an hour a day, I don't think it's a huge commitment. I think efficacy is going to depend on an absurd number of variables. Jude has a number of deficits, so while I was hoping for noticeable gains, I also had modest expectations. While it will not replace a good occupational/physical therapy program, I think it falls under the "might help, can't hurt" category of augmentative therapies.


If you'd like to learn more about our experience with the Forbrain program, click the headset image.

To read other Crew experiences with Soundsory, click on the Crew banner below! ©2012- 2018 Adventures with Jude. All rights reserved. All text, photographs, artwork, and other content may not be reproduced or transmitted in any form without the written consent of the author. http://adventureswithjude.com
Meg Falciani at 1:20 PM