Most of my readers know that Celia is my instrument player. She has seven years' worth of violin lessons and three years of piano, plus she sang in her grade school choir, but I should consider changing her name to Ariel...as in she can play on her violin "But who cares? No big deal! I want MOOOOORE!!" Several years ago, Matthew took guitar lessons but discovered he is not an instrumentalist, so his guitar has sat in the closet, practically mocking Celia. She's tried a few YouTube lessons but really hadn't gotten very far.  The Crew offered us the opportunity to try more formal, cohesive lessons from Guitar 360 Method...folks, I apologize for the fangirl screaming. 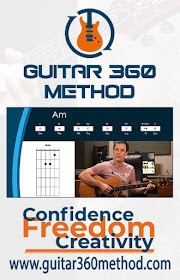 Guitar 360 Method is a new guitar learning program from Krisz Simonfalvi. Mr. Simonfalvi is a musician and teacher who had a circuitous path to his career; he began to play guitar, gave it up because it just did not resonate with him, and then circled back as an adult. He notes that there are two ways to learn to play: one is just by picking at the guitar and learning the technical aspects, and the other is through a theory-based trajectory. The problem is that most theory is based on the piano -- which, while a strong music foundation, doesn't necessarily apply practically to other instruments.  Celia will completely agree with this -- while she can play both violin and piano, it's not like you can interchange music. As she says, "I can play piano music on my violin if I play just the treble clef line, but it may not sound the same or as good as on a piano because I can't play bass clef and treble at the same time on the violin. The melody might sound the same going from violin to piano because you can play just the treble clef." While Guitar 360 Method is actually teaching her a third style of instrument-specific theory, but one that has a practical application to playing guitar. 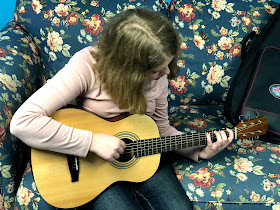 Have you ever listened to a Billy Joel song? An incredibly strong understanding of how music works is how he could turn what is basically scales into a hit song ("The Longest Time") and morph Mozart's "Pathétique Sonata" into "This Night." Why is theory-based instruction important to me, as a parent? Because theory is what really allows a student to understand what she is doing, why she is doing it, and how to properly play with music. An understanding of theory is critical even just to transpose piano to violin or guitar; without it, you cannot manipulate the music and have it sound right.

Practically speaking, I don't expect her to rise to Mr. Joel's level of renown (if she did, that would be fantastic, but let's face it -- there can only be one Billy Joel), but it's clear to me that the foundation of any musical success is a proper understanding of theory.  Here,  Mr. Simonfalvi shines, because his course is geared toward both the casual student who just wants to learn to play the music in front of him or the student who intends to learn to re-arrange or compose their own music.  He says:


I've taught this content from age 9 and up, however, it is designed for students who want to be creative on the guitar - understanding how music works, rather than JUST learning songs.

This makes it perfect for Celia, because it will teach her both the basics of "how to play" - how to hold the guitar, how to strum, where to put her fingers on the guitar's neck - but also WHY she's holding it where she is and when to use a pick vs. her fingers.  She had an "AHA!" moment right at the start.  Mr. Simonfalvi explains why you press the strings near the frets (better control of the strings and clarity of sound and she looked at me with a dropped jaw. THAT was something she never learned from playing around with other videos; she just thought you stuck your fingers on the strings.  Obviously, in six weeks she's learned more than just where to hold the guitar, but, to me, it's the little things like that - that you don't really know unless you're told - that help make this course worth the tuition. 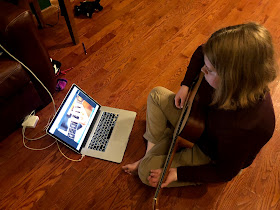 Guitar 360 Method currently offers two courses. The first is a free introductory level course that will take you from "how to hold a guitar properly" to "I can actually play something, and it sounds like a song" in about three weeks. Obviously, there needs to be a consistent effort on the student's part, but after trying that part out, I can say, "Yes, you will."  While Celia has played around the guitar before, she really was trying to apply what she knew from playing pizzicato on the violin to picking at a guitar. You really don't have the same technique - pizzicato uses a plucking motion, and, of course, there are no frets on a violin neck. Starting at the very beginning helped her realize that playing guitar strings isn't the same at all.

The second, tuition-based course is a 13-week "Semester One." It contains the three-week basics course and then expands beyond "My First Chord" into the major, minor, and pentatonic scales, and then into playing Chords in multiple Keys.  Each week has a clearly defined focus, so the student understands what the goal of the lesson is.

The videos for the lessons total about half an hour, so definitely a reasonable length lesson for beginners - long enough to be worth making an appointment with yourself, but short enough to not be a barrage of information. Celia particularly liked that it's not one long half-hour video, but rather each topic is presented in an individual section. 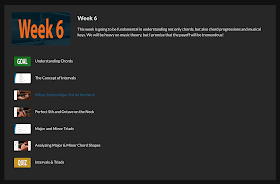 This meant she could quickly go back over a topic without having to fuss with finding the correct minute mark, or she could break it down into smaller ten or fifteen-minute chunks so that she could learn a concept, ruminate on it a bit, play with it, and then add on the next idea.  Mom liked that there are defined practice exercises assigned for each week. This meant she could go back to the prior week's to work on solidifying those concepts but also had specific activities to reinforce new lessons. There are also quizzes on the ideas, making it ideal for students who need grades for transcripts. While hearing Celia advance in playing skill shows me she is absorbing practical knowledge, the quizzes help me see that she understands the theory behind the playing. 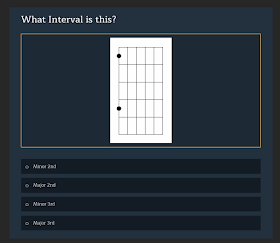 Mr. Simonfalvi promises that students will have enough theory and technique to jump into a band and be able to hold their own by the end of the 13 weeks. Keep in mind, he's not promising to turn your student into Mike DelGiudice and have her be playing in Billy Joel's band in those 13 weeks, but you'll have a competent guitar player that's not only ready to play but also able to understand what she is playing. ©2012- 2018 Adventures with Jude. All rights reserved. All text, photographs, artwork, and other content may not be reproduced or transmitted in any form without the written consent of the author. http://adventureswithjude.com
Meg Falciani at 8:00 AM