Vanderbilt, Rockefeller, Carnegie and Morgan: The Bridge to a New America 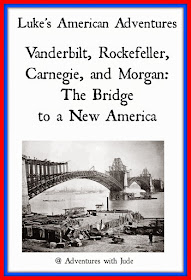 America wasn't discovered -- she was built, first by colonial settlers and then by the actions of men who believed in the freedom to grow free of the bondage of England and slavery. By the end of the American Civil War, like many of her buildings and industries, she was in pieces. In the years following the war, new industries laid the foundation for her reconstruction. Cornelius Vanderbilt, John D. Rockefeller, Andrew Carnegie, and J.P. Morgan were among the men who constructed a bold vision for a new, modern America.

Cornelius Vanderbilt was born on May 27, 1794 on Staten Island, New York. Although he rose to become one of America’s first tycoons, he grew up impoverished, watching his illiterate father, Cornelius Vanderbilt Sr., toil away as a seaman. At age 16, the junior Vanderbilt began the first passenger ferry business in New York harbor with just one boat. By the mid-1840s, he earned the nickname "The Commodore," operating a fleet of more than 100 steamboats that controlled traffic on the Hudson River. In the late 1860s, rail travel began to grow in the United States, and once again The Commodore seized opportunity. He purchased railroads in New York and followed the same business model he had used with his ferry venture, improving service and offering customers low fares. In 1863, Vanderbilt took control of the Harlem and was elected its president. He later explained his reasoning for purchasing it: to show that he could take the "worthless" railroad and make it valuable. Others only saw its limits, but he saw a key advantage: it was the only steam railroad to enter the center of Manhattan. From Manhattan, the Harlem ran up to Chatham Four Corners, New York, where it had a connection to the railroads running east and west. In 1864, the Commodore sold his last ships, concentrating on expanding railroads. His son (and eventual heir) William Henry convinced him to grow his holdings from New York to Chicago, IL. After only five years in the railroad business, the senior Vanderbilt had reportedly made $25 million - an astounding payoff! His first wife, Sophia Johnson Vanderbilt, died in 1868, and a year later he remarried Frances Armstrong Crawford Vanderbilt. At 34 years his junior, Frank gave the 73-year-old Commodore a new outlook on life, one that included philanthropic giving. He gave a gift of one million dollars - $260 million in today’s currency - to Central Tennessee University, which was renamed Vanderbilt University in his honor. When he died at his Manhattan home on January 4, 1877, his estate controlled the largest fortune accumulated in the U.S. at that time, equivalent to $26 billion dollars.

Entrepreneur John Davidson Rockefeller was born on July 8, 1839, in Richford, New York. A polar opposite to his con artist father, Bill, John was a careful and studious businessman who refrained from taking unnecessary risks. The young Rockefeller sensed an opportunity in the oil business by the early 1860s. Despite the ongoing Civil War, he opened his first refinery just outside of Cleveland, Ohio in 1863, and in June 1870, formed Standard Oil of Ohio, which rapidly became the most profitable refiner, first in Ohio and eventually in the entire United States. One of Rockefeller's favorite business maneuvers was to buy up or create oil-related companies, like the makers of tanks, barrels, and pipelines, and then inflate the prices for competing companies. He would also secretly buy competing companies and then use officials from these companies to spy on the activities of competitors. The sheer size of Standard Oil made it possible for Rockefeller to bully the railroads into granting him big rebates on shipping. The rebates made his shipping costs much lower than that of any other competitor and worked to defeat the entry of new oil companies into the market. Rockefeller soon owned ninety percent of oil industry, creating the first monopoly in United States history. Despite being a man of great religious devotion, his success was ironically based what would appear to be a complete lack of conscience. Late in life, Rockefeller devoted himself to philanthropy, giving away more than $530 million to various causes. He died on May 23, 1937, in Ormond Beach, Florida. Few recall his humble beginnings, as his name has become synonymous with wealth and prosperity.

Industrialist and philanthropist Andrew Carnegie was born on November 25, 1835, in Dunfermline, Fife, Scotland. In 1848, 13-year-old Carnegie and his family immigrated to the United States and settled in Allegheny, Pennsylvania. At 18, Carnegie became the protégé of Thomas Scott, president of the Pennsylvania Railroad, and became the business manager of the company by the time he turned 24. In 1865, he left there to manage the Keystone Bridge Company, and in 1868, Carnegie's company won the contract to build the Eads Bridge,  spanning the Mississippi River at St Louis, Missouri. This was almost as big a risk as leaving Scotland behind for America. If the bridge succeeded, it would be an amazing new connection between the East and the West, but a mile-plus long bridge - longer than any built before - was an exercise in trust in an era when one in four bridges failed. The iron that was normally used for bridges did not have the strength to withstand the weight of a train and its freight, but Carnegie believed a steel bridge would succeed. However, steel was difficult to mass produce and extremely expensive. Carnegie eventually found the solution in the Bessemer furnace, but the construction fell years behind schedule and was nearly buried in debt. In 1873, Carnegie's bridge over the Mississippi was completed. However, he still needed to convince people that the bridge - even made of steel - would not collapse. Inspiration struck Carnegie; a common myth of the time stated that an elephant could sense when a structure was unstable and would refuse to cross. Carnegie used this perception to his advantage, and had John Robinson nimbly lead an elephant across the bridge, proving that steel was the new material for railroads to use. The new Carnegie Steel Company went on to revolutionize steel production in the United States. With a start-to-finish strategy (mining the raw iron and fueling coal, building refineries, and owning ships and railroads for transporting the goods) Carnegie became both the dominant force in the industry and an exceedingly wealthy man. In 1901, he sold his business to the United States Steel Corporation, created by legendary financier J.P. Morgan, for a more than $200 million profit, and then turned to philanthropy, investing in incredible $350 million in education, art, and music before his death in 1919.  In today’s dollars, that would be about $67 billion donated to fund over 2500 libraries, schools and universities nationwide, and the famed Carnegie concert hall in New York City.

Legendary financier, art collector, and philanthropist John Pierpont (J.P.) Morgan was born on April 17, 1837, in Hartford, Connecticut. After working for his banker father, he started his own private banking company in 1871. J.P. Morgan & Co. became one of the leading financial firms in the country. It was so powerful that even the U.S. government looked to the firm for financial aid with the depression of 1895. During Morgan’s career, his wealth, power, and influence attracted a lot of media and government scrutiny. During the late 1800s and even after the turn of the century, much of the country's industry - railroads, steel, banking - were in the hands of a few powerful business leaders and criticized for creating monopolies. Morgan dominated two industries in particular; he helped consolidate railroad industry in the east and formed the United States Steel Corporation - the world’s largest steel manufacturer and first billion dollar corporation - in 1901 with the purchase of the Carnegie Steel Corporation. The US government became concerned that Morgan had created a monopoly in the railroad and steel industry. In 1904, the Northern Securities Company was dissolved by the Supreme Court because it ran afoul of antitrust laws. The government filed an antitrust suit against Morgan in 1911, followed by an investigation by the House of Representatives the following year. Neither the suit nor the investigation ever uncovered wrongdoing on Morgan's part. In addition, despite being under investigation at the time, the federal government again looked to Morgan to personally shore up banks struggling to survive the Panic of 1907. Although an astute businessman, Morgan had many interests beyond the world of banking. He enjoyed sailing and participated in a number of America's Cup yacht races, and he was an ardent art collector, amassing one of the largest art collections ever. These works now encompass a large part of the collections held by the Metropolitan Museum of Art and the Frick Collection New York. Morgan died in 1913 in Rome, Italy.

By the late 1800s, American had been decimated by the Civil War. Though the north had a large number of factories and railroads, the agricultural economy of the south had been laid to waste. In order to rebuild and re-establish itself as a world player economically, the post-war America needed to propel itself back into the forefront of the Industrial Revolution. Vanderbilt’s railroads, Rockefeller’s oil, Carnegie’s steel, and Morgan’s cash helped mend the nation’s economy, and built - both literally and figuratively - a bridge from the Gilded Age into a new century.

©2012- 2015 Adventures with Jude. All rights reserved. All text, photographs, artwork, and other content may not be reproduced or transmitted in any form without the written consent of the author. http://adventureswithjude.com
Meg Falciani at 8:00 AM